When people think “motive power,” their first thought probably isn’t about sustainability. No, most people are worried more about how long a forklift battery will last per charge, how many battery cycles it can take before its performance degrades, or even how much power draw the batteries will require to reach a full charge and how much that will affect their power bill.

However, it might just be time for everyone in charge of a fleet of battery-powered vehicles to consider sustainability the next time they’re getting ready to choose a motive power solution. Why should you think about sustainability when choosing your next forklift power system?

Here are a few reasons: 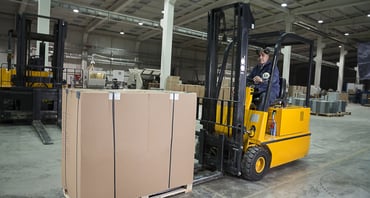 When choosing a battery for your forklift fleet, it may help to consider the recyclability of the battery you choose. For example, lead batteries have a well-established recycling program that makes them easy to recycle. Lithium-ion batteries, on the other hand, are less well-established in the motive power industry and are a bit harder to recycle.

Why does recyclability matter? Well, as pointed out in an article by MHI Solutions Magazine, “Because lead battery recycling technology and networks are so well developed, owners may recoup some of the cost of new batteries.” In fact, as noted by the article, “Even without a credit, the convenience of having someone pick up the batteries for free is a time savings.”

By thinking “green” and using highly-recyclable batteries, you can reduce the total cost of ownership (TCO) of your batteries by selling the used batteries to recycling organizations and recovering some money (or, at least, not having to pay an extra disposal fee). This can help you stretch your budget a bit when the time comes to buy new batteries.

One issue faced by many forklift fleets that use battery-powered forklifts is the need to have three batteries for each forklift in operation: one for use in the forklift, a fully-charged standby battery to replace it, and one battery in the charger. This is the traditional method for avoiding excessive downtime when batteries need to be changed.

However, the time taken to dismount the battery in the forklift, load in the standby, and replace the battery on the charger with the now-depleted battery still cuts into the productivity of the forklift operator.

One way to improve efficiency is by going green and using environment-friendly, highly efficient batteries that can last longer per charge and don’t take as much time to charge. This is one area where newer lithium-ion batteries excel. Mil Ovan, president and chief marketing officer for MHI member company Navitas Systems, was cited as an example of the efficiency of these batteries in the MHI article:

“A recent study conducted by an independent third party assessed his company’s lithium forklift battery system and its ability to work without changing batteries for two to three shifts per day. ‘The report showed a 17 percent increase in pallets moved per shift vs lead acid batteries’ he [Ovan] says. ‘The report compared the lithium battery performance to lead battery performance in identical situations.’ The increased productivity offsets the initial cost of the battery and produces a payback in less than 24 months.”

While the useful life of a battery will vary depending on the number of charging cycles it can complete and how heavily it is used, most batteries that are well cared-for should last well beyond the two years it would take to achieve the payback mentioned in the MHI article. For example, as noted by Career Trend, “Most modern forklift batteries are designed to last a minimum of 1,500 charge cycles. If a battery is under heavy use and requires daily charging, the 1,500 charge cycles would represent approximately five years of service.” Based on this average, an efficient lithium-ion battery could provide enough productivity benefits over its lifetime to achieve payback two and a half times over.

3: Your Supply Chain Customers Will Look Good If You’re Environment-Friendly

Among consumers, there’s a major push for companies to follow eco-friendly practices. For example, as noted in one Computer World article:

“Studies have shown as many as 9 in 10 expect businesses to operate responsibly and address environmental issues.

While warehouses rarely interact directly with customers from the general public, the storefronts, offices, and other businesses downstream of your warehouse in the supply chain do. By working in environmentally friendly practices into your warehouse, you become another example of your own supply chain customers’ dedication to “green” practices—helping them attract eco-conscious customers. This is something that many of your business customers will appreciate.

These are just a few of the reasons that you may want to think about sustainability before picking your next motive power supply solution. Want help picking the right “green” electric forklift battery solution? Contact the experts at Southern States Motive Power today for helpful advice and suggestions for getting the most out of your motive power solution.

Thinking about Predictive Maintenance? The 4 Factors You Need to Consider Now